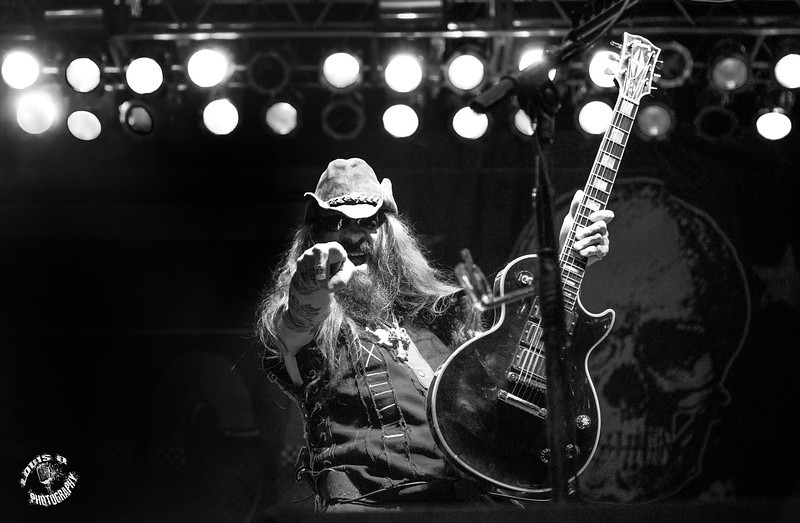 Seven of the best known rock bands that were hugely popular in the mid to late 2000’s with chart topping hits, platinum albums and sell out tours, continue non-stop to make headlines and news nearly two decades later with new albums, material, touring with relentless energy and pure raw rock. On Friday September 16, the North American super concert tour “Make America Rock Again” made a stop at Tags Summer Stage in Big Flats, NY. Along for the stop at Tags were seven bands who perform nightly on this 42 city tour including the bands 12 Stones, Tantric, Crazy Town, Alien Ant Farm, Saving Abel, Saliva and Trapt. Several other bands that play select dates only on this tour but were not at Tags this night are Drowning Pool, Fuel, P.O.D., Puddle of Mudd and VAST.

The seven bands that were on tap for the “Make America Rock Again” in Big Flats, NY were high on energy, performance, excitement and crowd involvement and did not disappoint the nearly sold out crowd at Tags on a Friday night complete with a full moon high in the sky. It was not uncommon to see other musicians, band and crew members mingling in with the crowd following their own sets. Some other musicians and crew, after exiting the stage while the next band performed, could be seen hanging out, tossing horns, taking selfies and hanging out with the audience and even crowd surfing.

Starting off the night was the band 12 Stones hailing from Mandeville, Louisiana with its current lineup of Paul McCoy on vocals, Eric Weaver on guitar, Sean Dunaway on drums and David Troia on bass. 12 Stones definitely got the crowd at Big Flats up on their feet and primed for the night playing a short but power packed four song set including their hits “Adrenaline,” “Infected,” “Bulletproof,” and “Broken”
Check out their website here for the latest
12 Stones Fascebook 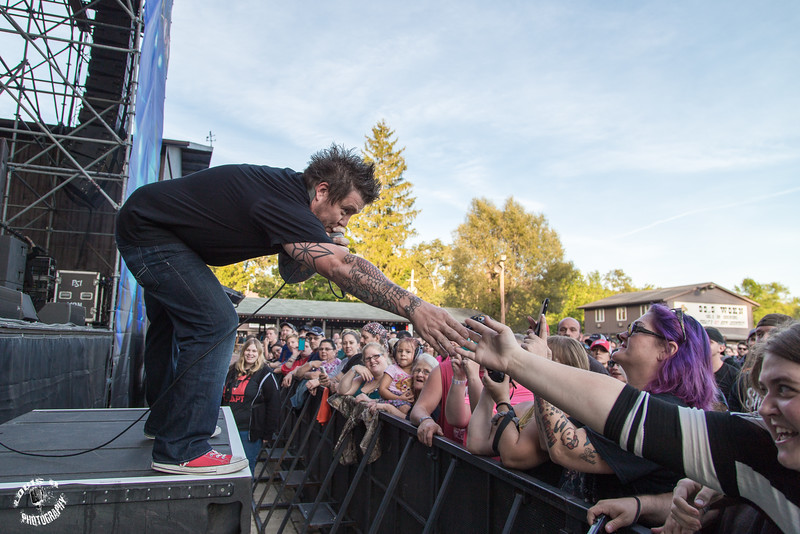 Hitting Tags Summer Stage next was the ever popular band Tantric from Boston, Massachusetts. Lead by front-man and the only original member remaining, Hugo Ferreira along with band members Scott Wilson on bass, Ty Fury of Trapt on guitar (The band recently announced as of September 9th they had parted ways with guitarist Tommy Gibbons) and Mike Smith on drums, Tantric put on a mesmerizing show playing a few of their well known songs “Down and Out,” “Hey Now,” “Breakdown,” and “Astounded” from their 2001 platinum selling self titled album. As noted, filling in on guitar duties in a quick pinch, in superb style was Ty Fury of the band Trapt who would perform last on tonight’s bill. Ty most definitely had his hands, well rather, fingers full as he is performing with two of the bands on this “Make America Rock Again” tour.
Check out their site here
Tantric Official

Crazy Town originally from L.A. are best known for their U.S. Billboard number 1 smash hit “Butterfly” back in early 2000 and is led by original founding member Seth Binzer AKA “Shifty Shellshock” along with Bobby Reeves. Crazy Town hit the stage jumping, literally, all over the place. Reeves would be seen later in the night crowd surfing above the sea of hands at the Summer Stage, interacting with fans and taking selfies. With a blend of rap, rock, hardcore, and alternative styles of music, the group was surely dynamic and not lacking for energy as they had the entire crowd jumping in unison to several of their songs.

Crazy Town with its current line-up of original member “Shifty” along with Reeves, Nick “Dax” Diiorio on bass, Kevin Kapler on drums and percussion, Rick “R1CKONE” on turntables and sampling and Eli “ET” Tanneous on guitar never let up as their set seemed to intensify and pump up the crowd as it moved along. A few songs from their set at Tags included “Battlecry,” “Come Inside,” “Lemonface,” “Born To Raise Hell” and of course closing the set “Butterfly.”
Check out their upcoming tour dates, news and more at their website below.
Crazy Town Official 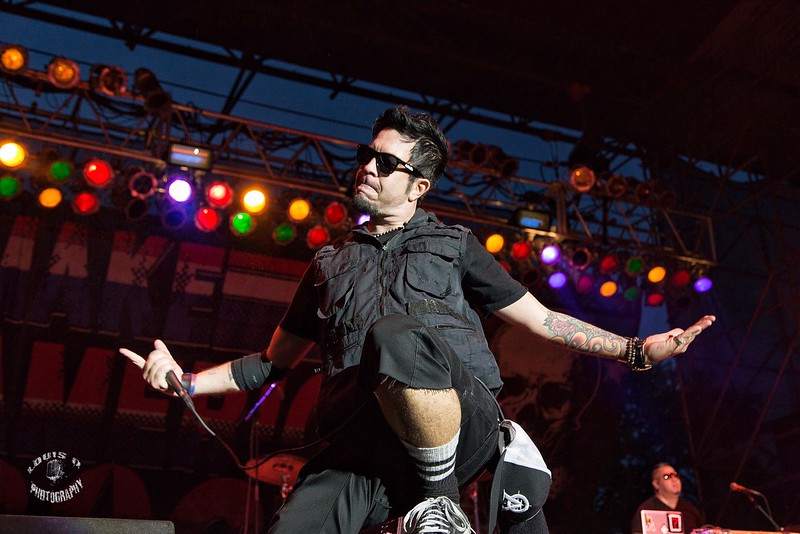 Up next was Alien Ant Farm who formed 20 years ago in Riverside, California with three original members remaining. Dryden Mitchell on vocals, Terry Corso on guitar, Mike Cosgrove on drums, and newest bassist Tim Peugh who joined the band in 2014. Alien Ant Farm played a fairly mild but solid set including several of their well known hits including “Courage,” “Forgive and Forget,” “Movies,” and “Smooth Criminal” the Michael Jackson cover which the band is best known for.
Check out their website here
Alien Ant Farm Official 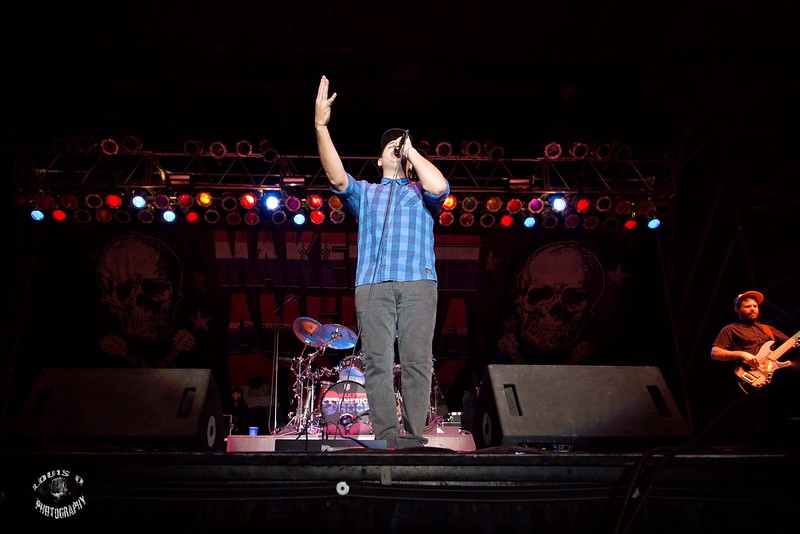 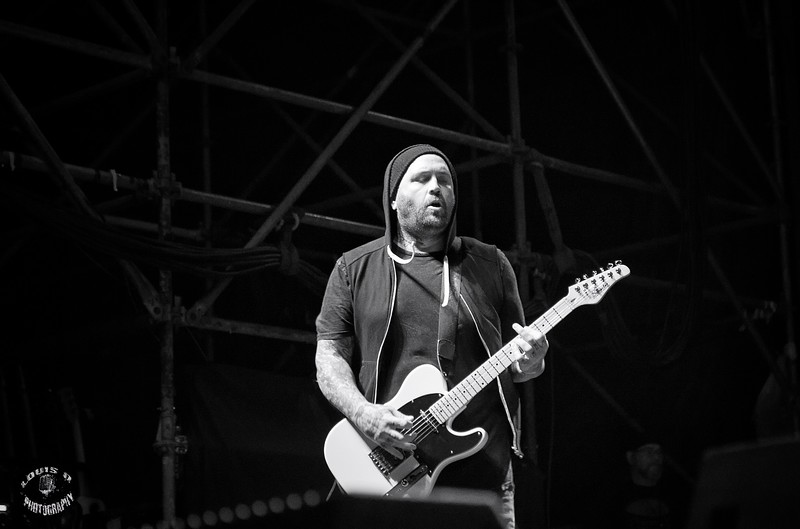 The fifth band to quickly change over and continue the rock show at Tags was the five piece band who like to call their home base “Tennessippi” was Saving Abel led by front man and super entertainer Scotty Austin. Saving Abel are going strong on their 12th year. Having formed in 2004, the band has seen a few line up changes, most notably singer Scotty Austin who has been out front since 2013. Saving Abel played many of their hard rock songs with gritty attitude, lots of energy and dialogue with the pumped up Tags crowd. Their current line up consists of Austin on vocals, Scott Bartlett and Jason Null on guitars, Eric Taylor on bass and Steven Pulley on drums. Saving Abel ripped powerfully through close to a 40 minute set which included the songs “New Tattoo,” “The Sex is Good,” “15 Minutes of Fame,” and probably their best known hit from 2008 “Addicted.” Saving Abel surely got the crowd revved up for the final two bands of the night, Saliva and Trapt.
Check out their site here
Saving Abel Official 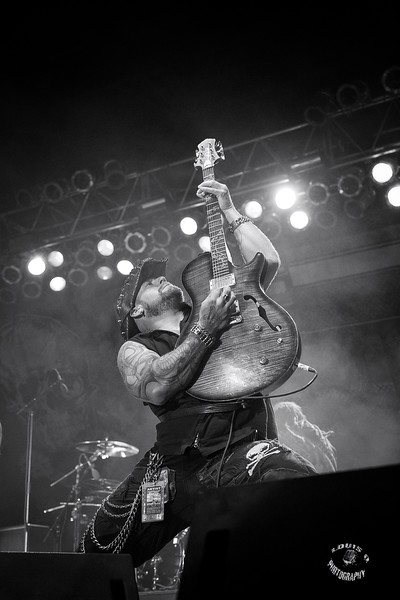 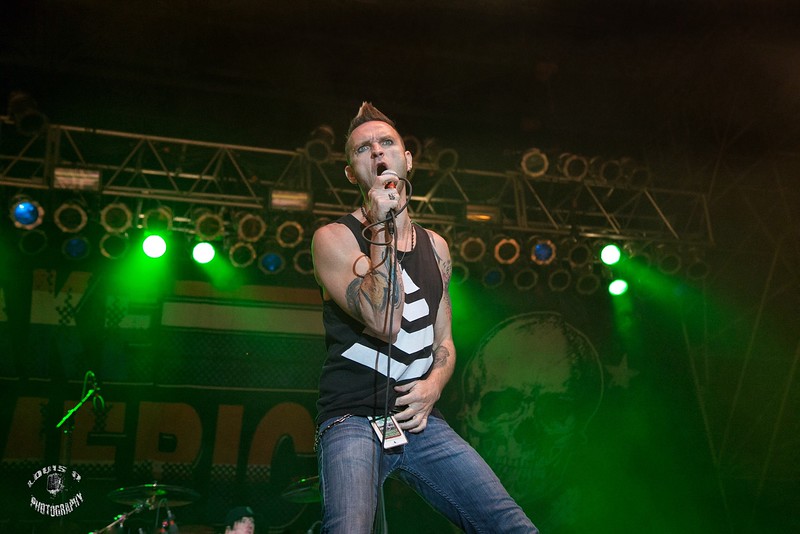 After Saving Abel made sure the crowd was fired up and ready to keep on rocking into the night the mega band Saliva came out like a throat punch and kicked the audience in their teeth, figuratively speaking of course. Saliva, from Memphis, Tennessee came out of the gate swinging with their opening song “Ladies and Gentlemen.” If the crowd at Tags wasn’t pumped at this point, Saliva made sure they were now. They continued the onslaught of their heavy rock show with “Survival of the Sickest,” “Trust,” “Doperide,” “Always,” “Click Click Boom,” and others including a killer medley which included Phil Collins “In the Air Tonight,” Pink Floyd’s “Another Brick in the Wall,” AC-DC’s “T.N.T.” and Zepellin’s “Whole Lotta Love.” Fans young and old, new and established were louder than had been all evening in response to Saliva’s show and in anticipation of the final upcoming band of the night, Trapt. Saliva’s current line-up includes lead singer Bobby Amaru who joined the band in 2012, original guitarist Wayne Swinny, drummer Paul Crosby and newest member, bassist Brad Stewart who formerly played with Shinedown and Fuel.
Check out their site here
Saliva Official

Finishing up the night was Trapt featuring Chris Taylor Brown on Vocals, Ty Fury on guitars, Pete Charell on bass and Brendan Hengle on drums, and as expected, Trapt closed the show with a solid power packed performance full of vigor and enthusiasm leaving the crowd wanting more after their set. Trapt, formed in Los Gatos, California in 1995 headlined the show in support of their new album DNA which was released in August 2016. Trapt continues to demonstrate the ability to stand the test of time in regards to their music and captivate their audience. Ty Fury, as noted previously, showcases his wizardry on guitar in two separate bands on this tour, Tantric and Trapt. Trapt played a killer heavy set full of screaming guitar, thundering bass and drums along with fantastic vocals. Their nearly hour set included their hits “Who’s Going Home With You Tonight,” “Contagious,” “Headstrong,” “Bring it,” “Waiting” and several others. Trapt interacted well with the crowd engaging back and forth, discussing the tour, new album and thanking the fans at Tags. After the set, many of the bands could be seen interacting socially with the fans in the crowd and in the bar. All in all it was a very fan friendly, honest and real down to earth show with all of the bands performing well and showing their gratitude to the fans who continue to support them over the years and for making America rock again.
Be sure to check out their site here
Trapt Official 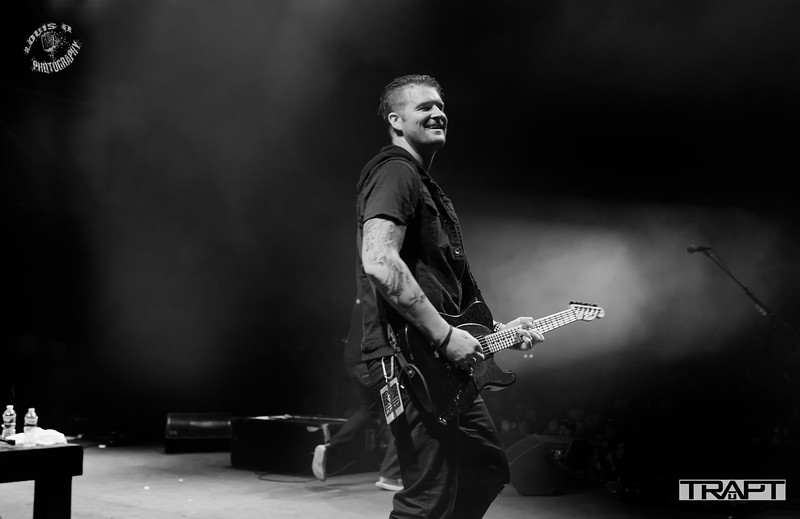 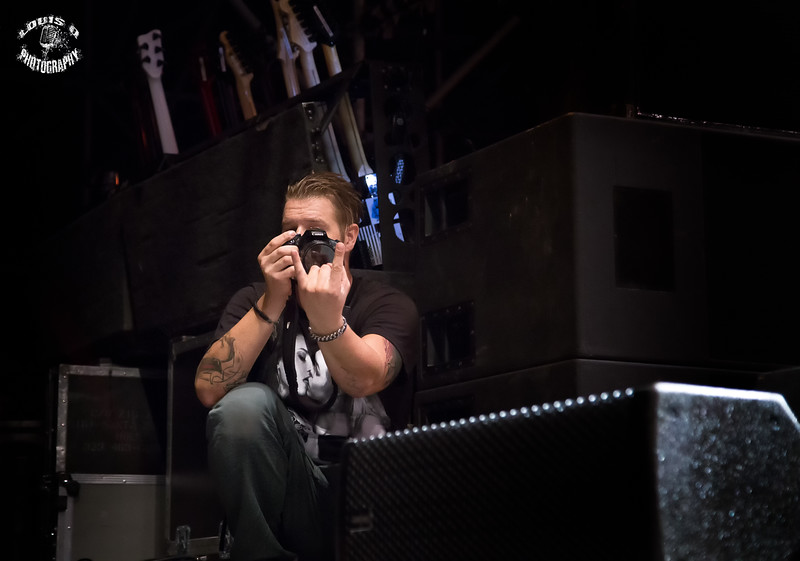 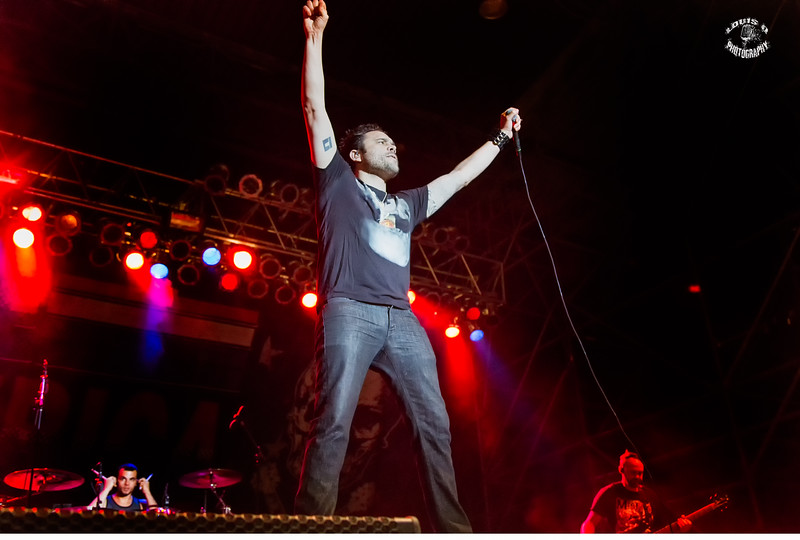 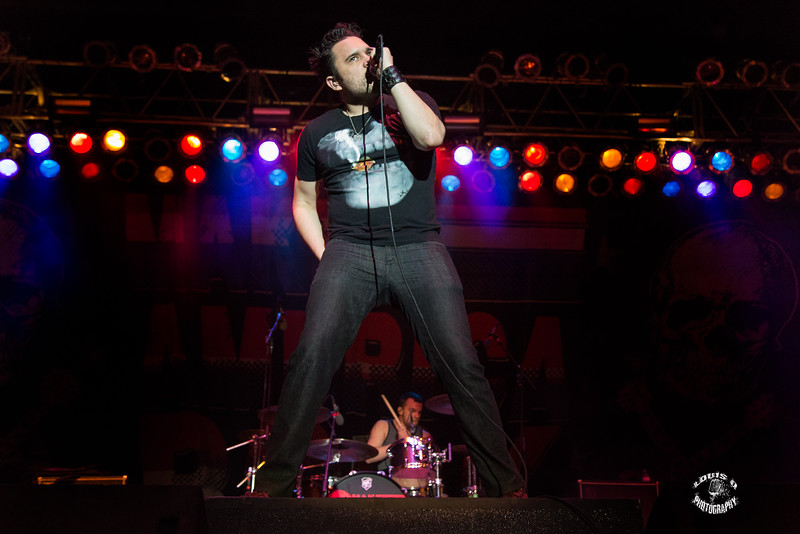 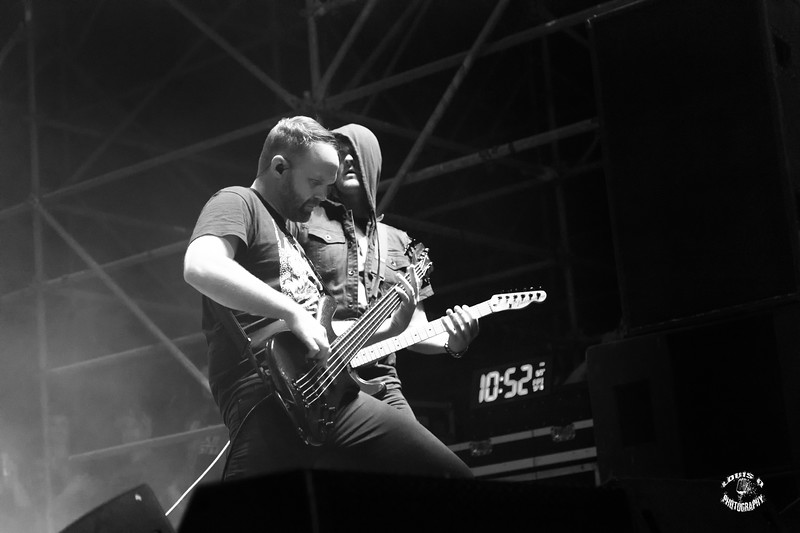