What do they say? “No rest for the wicked?” Well, I don’t know about the wicked part for me anymore, but I certainly know a thing or two about no rest. After securing my press/photo creds for Krock 20 only two days prior to the event, I was definitely stoked not only to have the opportunity to cover this amazing show but to see several bands I have been dying to see for some time. I knew it was going to be a long day having worked the previous few nights up to and including the night before the show. I however, was not going to pass up an opportunity to catch this monster rock and roll festival. Starting at 12:30 p.m. with a line up of 12 bands including Revolve, Bad Seed Rising, Fit For Rivals, Sons of Texas, Shaman’s Harvest, Nothing More, We Are Harlot, Adelita’s Way, Trapt, In This Moment, Breaking Benjamin and finally Shinedown ending the festival with the last set of the night from 9:00-10:30 p.m., I knew I was in for a long but kick ass day !!
I had charged my batteries, cleaned my cameras and lenses and packed the night before as I knew there would be no time to do it the day of the show. I got out of work at 7:30, grabbed a quick 3 hour nap and hit the road at 10:30 a.m. making only one stop at Dunkin for an extra-large coffee before making the 2 hour drive to Syracuse, NY. I had been alerted the night before by another photog friend of mine that all the exits getting of or on the ramps to the venue were closed due to the bridges being repainted. Seriously Syracuse? Piss poor planning on the city’s end, unless it was an intentional ploy to keep the crowd at a minimum. It didn’t work. After driving, as I guessed I might, straight through probably the roughest part of town, I arrived at the New York State Fairgrounds and found the parking lot.

I dropped the parking attendant the $15 parking fee and was ushered past a sea of hundreds of cars with literally thousands of half-naked, fun-loving, dancing and singing, drinking and partying tailgater’s. It was around 1 p.m. and the show had already started with Revolve hitting the first stage at 12:30. I assumed most of these festival goers were getting primed to see some of the bigger acts slated for later in the afternoon. After being ushered through what seemed like two miles across the field of rock and roll tailgater’s, I finally grabbed my parking spot and hurriedly grabbed my gear and made for the ramp to the venue. It was a good mile walk at least. Halfway to the will call ticket booth I realized that I may have forgotten to lock my car filled with a case of lighting gear, my extra equipment bag with my iPod and my $400 tripod. Screw it I thought anxiously as I was already missing the second act, Bad Seed Rising. I figured my stuff is insured so the hell with it. I grabbed my photo-pass and made my way into the venue to Chevy Court just as the third band of the day took the left stage. I was a bit bummed that I missed the first two acts, “Revolve” and “Bad Seed Rising”, who is currently on tour supporting “Adelita’s Way” I most definitely hope to catch both of these bands in the very near future. It was now just after 1:30 and “Fit For Rivals”, an American Alt-Pop Punk band from Jacksonville, Florida began their 30 minute set including songs Can’t Live Without You and Crash as well as a few off their new EP “Sugar”. I thought these guys were definitely cool and was impressed with a few of their songs. Led by female vocalist Renee Phoenix, they had a great melodic pop-punk sound with killer guitars and very energetic show. Definitely check them out.
FITFORRIVALS.COM .

I found my fellow photog friend and concert photographer/videographer master, Mr. Wade Spencer. I was impressed with the layout and organization of the festival as far as the bands were concerned. There were two monster stages side by side with about an 8 foot barricade between the stages and the crowd. Security were ample as I counted at least 20 security/staff personnel that kept very busy all day long with crowd control and managing the crowd surfers by safely catching them and escorting them through barricade back into the crowd. Their job became increasingly more busy and difficult as they day progressed and the $7 beer flowed. More on that later.

Next up on stage left was another band that I had never heard of. Hailing from McAllen, Texas with their debut 2015 album “Baptized In The Rio Grande”, was “Sons of Texas. “Sons Of Texas is a ballsy heavy southern rock band with a sound reminiscent of “ZZ Top meets Pantera” in good ole big Texas raising hell style consisting of members Mark Morals-V, Mike Villareal-D, Nick Villareal-B, Jon Olivares-G and Jes DeHoyos-G. If you wanna kick some ass Texas style, drink beer and listen to some good heavy music, be sure to check these guys out.
SONSOFTEXAS

Within 5 minutes of The Sons of Texas last kick ass song on stage left was one of the bands that I did know and came to see; “Shaman’s Harvest” was right on schedule at 2:50 on stage right. One of my favorite songs was and still is their 2009 #16 hit “Dragonfly”. “Shaman’s Harvest” is another all American rock band from the midwest. Hailing from Jefferson City, Missouri, the band consists of Nathan Hunt on vocals, Derrick Shipp and Josh Hamler on guitars, Matt Fisher on bass and Joe Harrington behind the kit. As excited as I was to see and photograph these guys, my camera really got its first real workout of the day. I got the most I could from my three song limit from these guys making certain I had enough to keep me busy in post for a long time. I love “Shaman’s Harvest” gutsy hard rock, acoustic, bluesy southern sound with the throaty Les Paul-Marshall amp chunk, the melodic vocals and harmonies and the killer bass sound. “Shaman’s Harvest” played an amazing 40 minute set which included their new single, a remake of “Dirty Diana” as well as two of my favorites, “Dragonfly” and 2014’s “Dangerous” from the “Smokin’ Hearts & Broken Guns album. Check them out for sure if you haven’t already.
SHAMANSHARVEST.COM 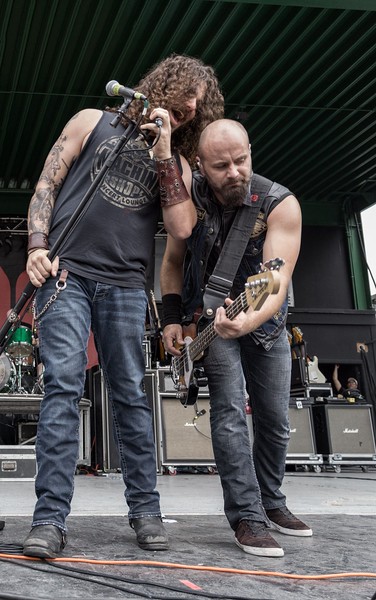 <
“Nothing More” hit the right stage dead on schedule at 3:35 p.m. Many of the fans, I knew, were here to check these guys out. “Nothing More” is a four piece alternative hard progressive metal rock band from San Antonio, Texas. With members Jonny Hawkins on vocals, Mark Vollelunga on guitar, Daniel Oliver on bass and Paul O’Brien on drums these guys have been around since 2003 but are making big waves currently with their chart topping 2014 release of their self titled album “Nothing More” featuring the songs “This is the Time (Ballast)”, “Mr. MTV”, and “Jenny”- the third single from their album that was written about lead vocalist Jonny Hawkins aunt and sisters struggle with mental illness. Please check these guys out at the following link. Not only are the a great band but also are quite inspirational and supportive advocates of mental health education and treatment. 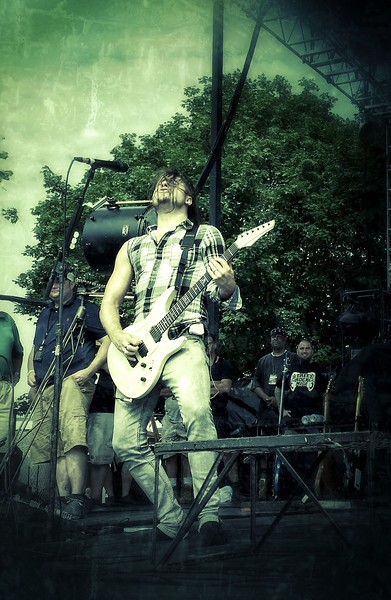 <
“We Are Harlot” is a four piece supergroup from Los Angeles, California featuring Danny Worsnop formerly of “Asking Alexandria” on vocals, Jeff George who was formerly Sebastian Bach’s guitarist, Bruna Agra formerly of “Revolution Renaissance” on drums and Brian Weaver from “Silvertide”. After mulling around some demo material and considering solo work, the band finally announced in 2014 they were signed to Roadrunner Records and would debut as a band with their first live performance at 2014 Rock on the Range festival. They released their debut album “We Are Harlot” in March 2015 after releasing their second single “Dancing On Nails”. Worsnop released a statement around this same time that he wanted to focus more on this band and decided to leave “Asking Alexandria” citing that they would do better off without him and that he no longer wanted to create heavy music.
I wasn’t sure who this band was that came on following “Nothing More” on stage right. Being a guitarist myself, I was immediately drawn to the killer guitar. It had a spunky as well as a meaty rock and roll sound reminiscent of 80’s rock bands. I didn’t know then, but it certainly makes sense that George was Sebastian Bach’s guitar guy. I loved the riffs, funky grooves and well-defined solos. Rocksound magazine reported in April, 2015, that the band sounds like the “offspring” of “Motley Crue” and “Skid Row” with influences from “Airbourne” and “Heavens Basement”. The band has stated that rock icons “Van Halen” and “Aerosmith” are their main influences and that they just want to be known as a “rock and roll band”. They played an eight song set including the “Queen” song “Tie Your Mother Down”. They kicked off their set with “Dancing on Nails”, “Easier to Leave” and “Somebody” and ended their 45 minute set with “One More Night”. Theirs was the first album I snagged from iTunes upon arriving home late that night. I always listen to the band’s music while I work on my edits of the band and this one did it for me. Do yourselves a favor and check these guys out for tour dates and music. And if you get a chance, I recommend catching a show. You can view their web page here.
WEAREHARLOT.COM

Krockathon 20 was a spectacular kick ass rock and roll festival featuring 12 of today’s best bands. In this first segment I reviewed the bands that I had the opportunity to photograph and the see live. I knew a few of the bands and was introduced to some amazing new music. I always support music and bands and am happy that my iTunes account now has about 70 new songs on it. I have tons of photos to edit and five more bands to write about as well as more of my Krockathon experience. Stay tuned for “Adelita’s Way”, “Trapt”, “In This Moment”, “Breaking Benjamin” and “shinedown”. Until then, check out all of these bands, get your rockin selves some new music and I hope you dig the photos.
More to come……