It felt like the first time for me. Cold, Wind, Torrential Downpour, Outdoor Concert. Yeah. On Saturday June 27, 2015 it began raining as soon as I got off work at 7:15 a.m. I once again looked at the weather forecast and radar and simply shook my head feeling thankful that my date had enough sense to upgrade our lawn seats in exchange for the terrific seats in the covered 100 section of the venue. I was completely blown away, as was she I think, at how good the seats actually were. We were at most, 12 rows back stage left/center. I had hastily and graciously given the previous two lawn seats away the morning of the show to a brave soul that was willing to play duck for the day. The radar showed a massive storm system over the entire Northeast with mostly yellows and reds throughout the area of Scranton, PA for the entire day. It was gonna be brutal, to say the least. The gal who received my free gift of two lawn tickets probably got more than she wished for. I should have had her sign a waiver excusing me from any serious illness like the flu or pneumonia. After an amazing show by both Foreigner and Kid Rock, I am sure, flu or not, most people who chose to brave the elements and attend the show left with zero regrets, only a few bucks shorter and had one hell of a story to write home about.

We arrived at the venue parking lot around 5p.m. after spending a few hours in the Scranton/Wilkes-Barre area at the local malls and restaurants trying our best to stay dry and warm. After only sleeping 2 hours prior to hitting the road, I was definitely feeling the zombie syndrome kicking in. It felt good to sit down and relax a bit before the show. We found a cool little BBQ in Wilkes-Barre, had a bite, and rested our cold, tired and wet bones while the torrential downpour continued outside. After paying our bill, up went the umbrella as we made yet another mad dash to the car while doing our best to avoid the small lakes that were beginning to form in the parking lot. At this point I was well past any capacity to drive let alone attempt to navigate through the typhoon and find our way to the parking area in time to walk to the gate. My co-pilot did an amazing job with the brand spankin new tickets, the driving, and putting up with my sorry ass as I complained of the beginnings of a sore throat. I tried to let on that I was fine and was not too tired and that my “second wind” was kicking in, but the 2 hours of sleep, the drive, the weather and now the beginnings of a cold….Ugh, I’m thankful she didn’t mind the heat cranked up to 100 in the car. So a BIG thank you !! You know who you are.

The parking lot was like a mud pit in the heart of the Amazon rain forest. Luckily we were able to snag a spot at the end of a row which we knew would make life much easier when the show was over and it was time to find our car. As we sat in the car waiting for a break in the downpour, we enjoyed listening to some tunes, watching the tailgaters who were well prepared to weather out the storm with their parkas, rain gear, boots, umbrellas. Hell they were living it up rain or shine. So at this point with my throat in full-blown swallowing razor blade like mode, I decided, hell, I guess I’ll take a nip off that bottle of Jim Beam that I had received earlier in the morning as a thank you from the gal who got the two extra lawn tickets. I figured, hey, it’s a Kid Rock show, the parking lot creatures are living it up, it’s pouring, my throat is killing me and we are getting primed for the fairly long, wet hike across the muddy parking lot, through the water park and into the venue. Lets do this. It worked. Just as I took my one generous sip of the warming goodness, the rain let up just enough for us to grab that umbrella one last time and make our way to the show.

Enough fluff. On with the show. This was only the third date of Kid Rocks “First Kiss, Cheap Date” tour with Foreigner. Kid Rock is making sure all of his fans get to see his show and hear his music with the second year in a row of the $20 “Best Night Ever” tour. This includes $20 tickets from the second row to the lawn, discounted merch, $10 CD’s, $4 beers special $20 food packages and reduced parking and service fees. Kid Rock kicked off this fun, affordable fan friendly tour on June 24 at the XFinity Theatre in Hartford, CT followed by the XFinity Center on June 25 in Mansfield, MA. The Pavilion at Montage Mountain in Scranton, Pa was the only the third stop on this 36 date tour. I had never seen Kid Rock before and have heard most of his stuff but never really paid that much attention. He no doubt got my attention 100% with this awesome $20 tour this year but more so, his live show. WOW !! I knew Kid Rock was good and has some pretty kick ass hits. I NEVER realized just how talented and diverse he or his band is. But, more to come on Kid Rock later. This is a Foreigner blog post. 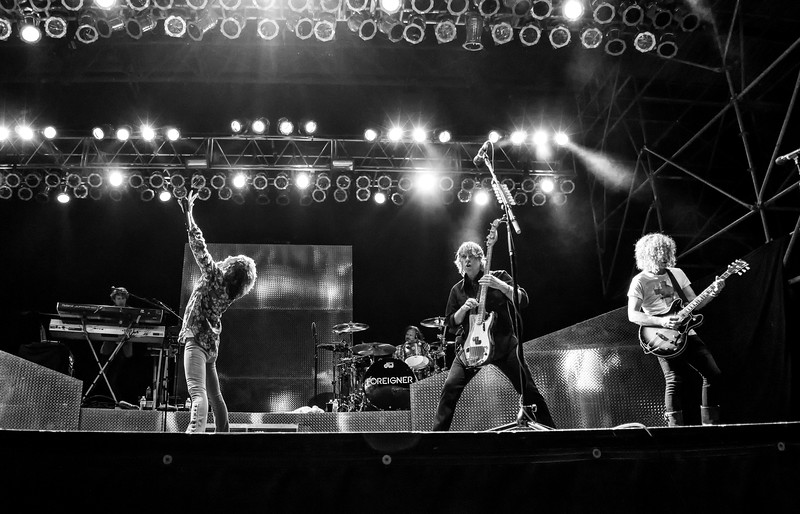 Despite choosing not to photograph this event, I decided to simply do a write-up of the show and experience and just enjoy my “Best Night Ever Cheap Date” in the rain with an awesome girl, good seats, a few cold beers, the Kid Rock show that I had heard so much about, kick back and relax. I was happy as well that I didn’t have to lug my gear out in the rain and carry it from the rain-soaked parking lot to the gate in the downpour. No gig is worth my precious gear, insured or not. After contacting Foreigners PR gal and getting a very quick and friendly reply, I was informed that she, unfortunately couldn’t issue creds as this was Kid Rocks show and that I would have to go through them. She was kind enough to hook me up with all the contact info I needed as well. I must admit, I did think about it but then decided I would rather just enjoy a show than worry about working and fretting over a shoot. Plus I felt with all the shows I’ve had the opportunity to shoot plus the ones coming up, that I just wanted to kick back and relax with my date and actually enjoy watching the show. I’m glad I did. I was able to actually snap some decent phone shots and videos from where we were sitting. However just for a disclaimer, most of these shots are from Foreigners 2014 tour. 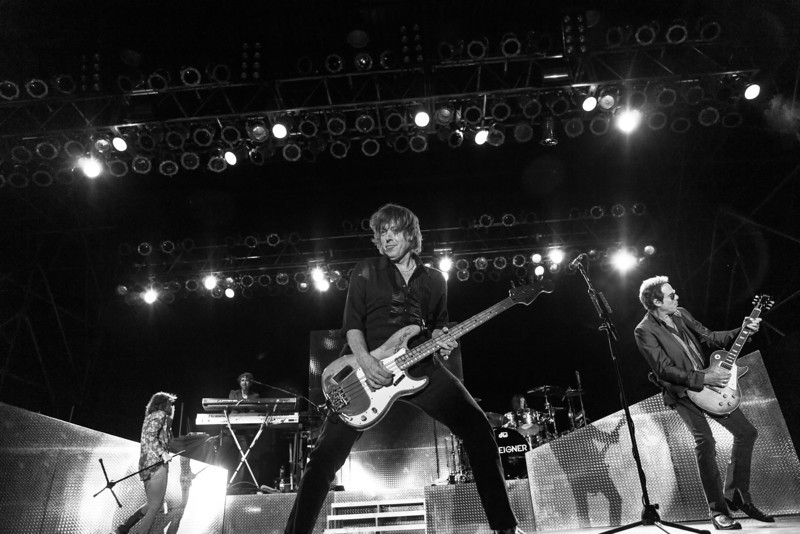 Rock legends Foreigner opened the show in amazing fashion as expected and getting the huge crowd on their feet by kicking their 60 minute set off with “Double Vision” followed by “Head Games”. Following the second song, Kelly Hansen, the bands lead vocalist since 2005 made reference to the crappy weather stating “It’s f***ing cold and wet and we don’t give a f***… Ain’t nothing gonna stop this show tonight” leading into the appropriate “Cold As Ice” which drew massive cheers from the cold and wet crowd from the lawn to the from row. Kelly was quite active moving in and out of the crowd, taking a ride at the end of the pavilion on a 20 foot riser and even inviting a young lady backstage for a “couple hundred” bucks after he accidentally spilled an ice-cold cup of brew all over her. He apologized profusely and was able to make a joke about it as I’m sure most people were soaking wet regardless of the rain or the beer. Despite many people feeling that this version of Foreigner is not as good as the true blue original line-up, or that they are not as good because original lead singer Lou Gramm is not fronting the band, I would have to disagree. I have never seen the original Foreigner but I have listened to all their albums and have been a huge fan since the beginning when I would listen to my fathers 8-tracks in the late 1970’s. This current line-up with band founder and lead guitarist Mick Jones, along with Hansen on lead vocals, Jeff Pilson on bass guitar, Bruce Watson on guitar, Michael Bluestein on keys, Chris Frazier on drums and the multi-instrumentalist Tom Gimbel on guitar,sax, flute are totally Foreigner in my book. They sound spot on, put on an energetic show and show no signs of slowing down. They have an endless supply of well-known and chart topping hits to draw from as well. 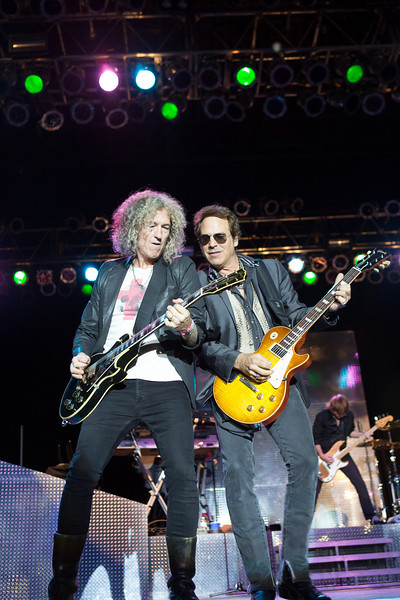 While pictures of Brando, Elvis and James Dean lit up on the jumbo video screen, Foreigner followed with their fourth and fifth hits of the night “Dirty White Boy” and my favorite “Feels like the First Time”. After this song, I decided I would brave the elements as it was still pouring buckets, and use the restroom. As one can imagine, the line was endless. It took me a while to finally take care of business and grab another beer. By the time I returned to my seat I was a little bummed that I missed Gimbal’s smooth sax on “Urgent” but made it back in time for “Juke Box Hero”. For the encore the Wyoming Valley West Middle School Concert Choir joined the band on stage for the ever popular ballad “I Wanna Know What Love Is”. I will never forget the look on these 12-year-old kids faces as they were displayed on the huge video screen. The smiles, wide open gazes out into the sea of people and the tears on these young kids faces were very real, honest and humbling. Kelly Hansen remarked as the Choir exited the stage “Our future looks beautiful, doesn’t it” Foreigner ended their hour-long set with their second encore, “Hot Blooded”. Foreigners set alone was worth the $20 admission. After a long day of little rest, endless rain, gusty winds and cold, a killer sore throat and earache and a long ride home I was happy as a lark to have had just a great time not taking many photos and enjoying the show and the company. Music has and always will be a major part of who I am and I am thrilled that I still have the ability to enjoy it whether behind the camera or just being part of the crowd. As an artist, musician and photographer I realized sometimes I just need to step back and see things in a different light and not stress over getting all the good gigs, or the best shots. Life is meant to be lived and enjoyed and spent with family and friends and the ones who are important to you. I know there are plenty of creative opportunities just waiting for me down the road. But for now, I couldn’t be happier being me. So for now, keep living life and keep an eye on “Live Through the Lens”. Next stop, The Foo Fighters. 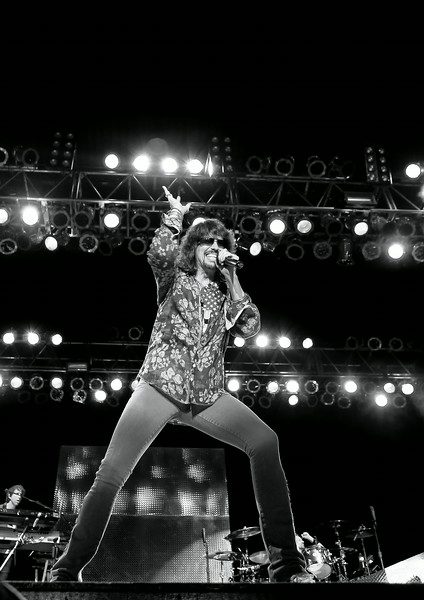 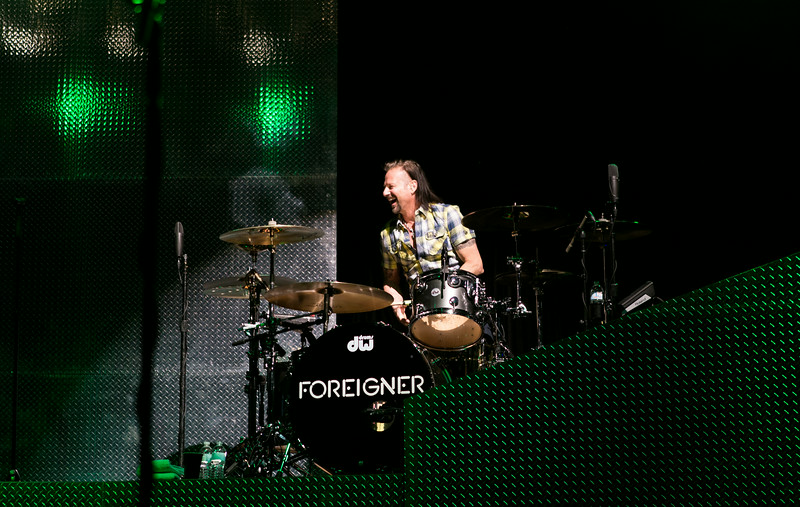