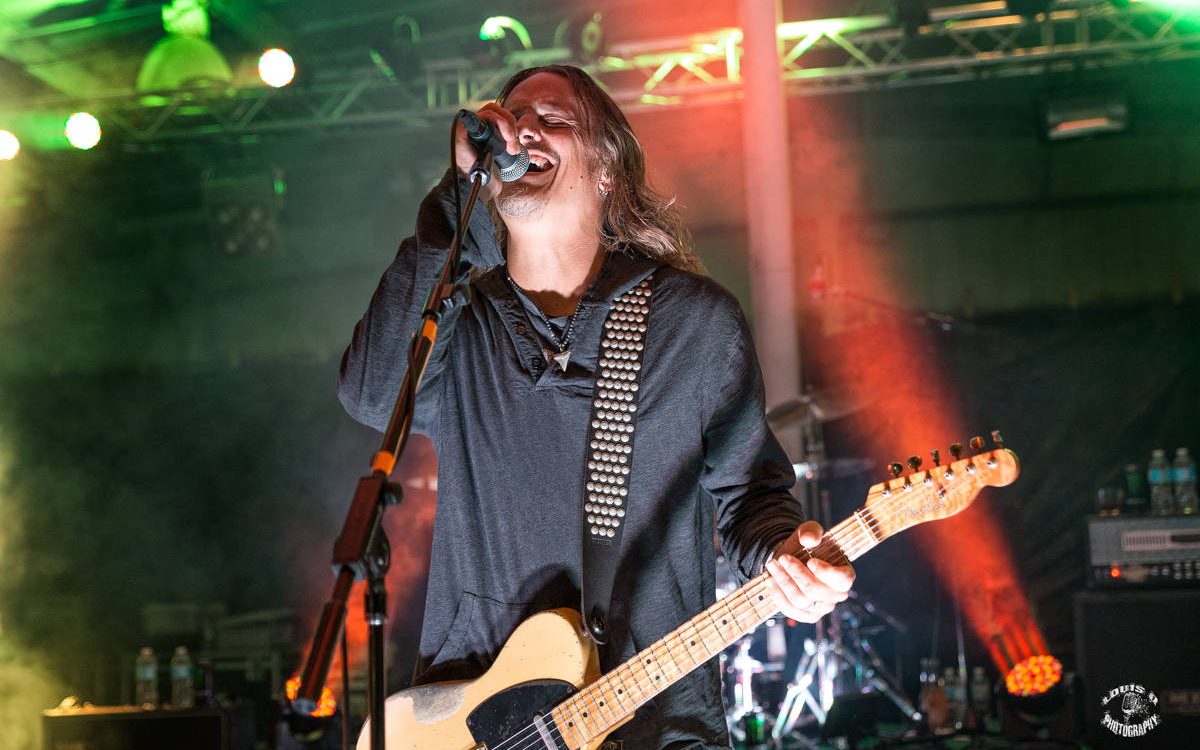 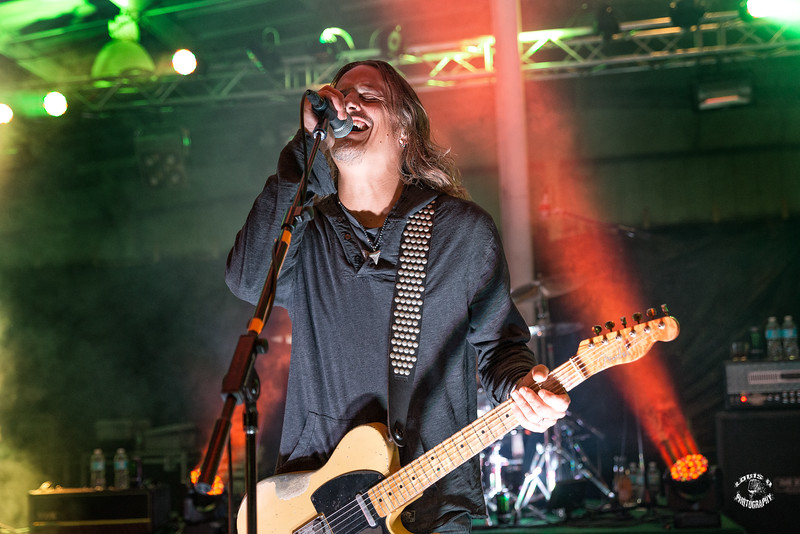 On Thursday September 29, 2016, Fuel featuring original founding member, vocalist and rhythm guitarist Brett Scallions made a select stop on their short summer tour in Endicott, NY at the grand opening

of the Blue Moon Sound Stage and Degennaro’s at the famous En-Joie Golf Course in their new outdoor covered music venue. The first ever “Hemorrhage Fest” was the inaugural event in this new music venue and the fans from the surrounding areas of Endicott, Vestal, Binghamton and more were out in force to see the band Fuel with opening guests Baku, from Ithaca, NY and the hometown local favorite Ghostdog from Binghamton, NY. The venue did it up right serving some food and beverages at their outdoor bar area. The large capacity outdoor music venue was slow to fill up at first but by the time Fuel hit the stage, it was quite hoppin’ and the room was ready to rock to some old Fuel favorites having been primed with killer music from both opening bands.
Fuel, originally formed in 1994 by guitarist/songwriter Carl Bell and bassist Jeff Abercrombie continues with Scallions, the only original member of Fuel left. Scallions, who also had a brief hiatus from the band from 2006 to 2010, has reformed the band with members Kemble Walters on guitar, Phil Buckman on bass and Shannon Boone on drums. Fuel gained popularity almost immediately out of the gate with their hits “Shimmer”, “Sunburn”, and “Hemorrhage”. To date, Fuel has released five studio albums Sunburn (1998), Something Like Human (2000), Natural Selection (2003), Angels & Devils (2007) and their latest, Puppet Strings (2014). Scallions has announced on social media recently that a six studio album will be released in the Spring of 2017.

Baku, the hard rock band from Ithaca, NY started off the night with some killer originals and a couple covers including Alice In Chains “Man in a Box” and Ozzy’s “Bark at the Moon”. Influenced by bands such as Alter Bridge, Seether, Breaking Ben, Shinedown and others, these guys were rock solid and tight with catchy hooks and lyrics with awesome musicianship. Make sure you get a chance to check these guys out at a show or pick up their latest work, the EP Poison with Perfection on iTunes, Spotify or Amazon. The five song EP includes the tracks “Animal MInd”, “Machine”, “Forest”, “Not to See”, and “Predator/Prey”.
Be sure to check them out online here:
BAKU FACEBOOK OFFICIAL 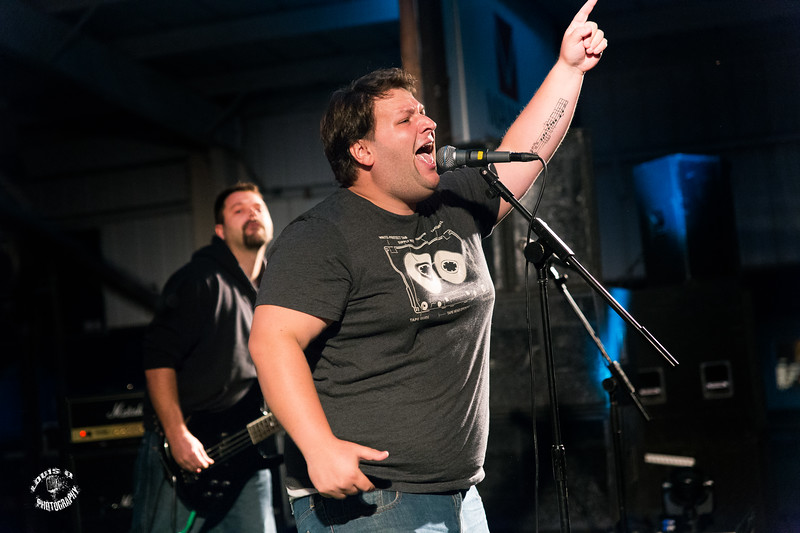 Following Baku was the hard rock band from Binghamton, NY, Ghostdog. Ghostdog, formed in the summer of 2016, includes some seasoned veteran musicians that “leave it all onstage”. This four piece heavy rock band rich in killer harmonies and amazing dual guitar riffs with a rock solid driving back end, definitely know how to put on a show and entertain the crowd with their rock persona stage presence from their clothing to their smooth transitions between songs to the flawless musicianship. The band consisting of Ethan Nealy on lead vocals/guitar, Ryan Richards on guitar/vocals, Keith Thomas on bass/vocals and Steve Ottman on drums/vocals played several kick ass original songs including “I Believe” and “Mr. Burn”. Both very impressive songs.
Check out the video here for “Mr. Burn”
Mr. Burn Video

Ghostdog is definitely a local force to be reckoned with in the hard rock scene. This kick ass solid four piece know their game, they know how to rock and put on a great rock show with driving originals and covers including Ratt’s “Round and Round”, AC-DC’s “Dirty Deeds”, and others. Do yourselves a favor and check these guys out the next time your on the town. You won’t regret it if you’re all about seeing a great rock band. More on the band, news, dates, photos can be found on their Facebook page. Take the time and check ’em out here.
GHOSTDOG FACEBOOK OFFICIAL

With much anticipation and excitement, the crowd at the Blue Moon Sound Stage was ready for Fuel, original band or not. As Bret Scallions once stated in and interview “Their is only one original of anything, and that includes Fuel”. He further stated in the interview “The original lineup with Carl, Jeff and Jody will always be something special to all of us and our first Fuelies”. Being the only original member left, lead vocalist and guitarist Scallions kept true to the songs he performed with his current lineup of Walters, Boone, and Buckman on this tour. Fuel opened the night in front of a packed room with fans pressed against the stage barricade chanting “Fuel, Fuel, Fuel” with the first song of their platinum first album Sunburn, “Untitled” and without hesitation went right into “Last Time” and “Empty Spaces” from their second album, the double platinum (RIAA) and their best selling album, Something Like Human.
Fuel continued with the hits throughout their 14 song set with others such as “Mary Pretends”, “Bittersweet” and more. Brett interacted with the crowd with a “chill, relaxed, lets have a fun night” attitude talking about various songs and their inception including the popular “Bad Day” which really got the crowd singing along and involved. Old fans or newcomers to Fuel certainly got a taste of what Fuel is about; the songs, the musicianship and the energy. Scallions and the band put on an amazing show with lots of excitement and energy for the room making the crowd feel a part of the show rather than just a quick stop in another small town. Scallions was humble and sincere throughout the night. The band held down all the classic Fuel songs with ease. Kemble Walters, singer/songwriter/guitarist/producer/engineer and more who also plays regularly with his band AEGES had killer tone with his classic Les Paul and Vox amp as did Scallions who played his trusty Fender Tele throughout the night. The multi-talented Phil Buckman who has toured with Filter and has had a successful acting career as well, was solid and punchy on the bass. Finally Shannon Boone, drummer extraordinaire, who has played with Puddle of Mudd and who has been with Fuel since 2013 was an animal behind the kit. Very seasoned musicians playing classic Fuel songs made for an amazing night of music. Fuel continues to play select dates in anticipation of a Spring 2017 release of a new album. Keep up to date with news, tour, merch and more at
SETLIST: 1.Untitled 2.Last Time 3.Empty Spaces 4.Time For Me to Stop 5.Mary Pretends 6.Headache 7.Bad Day 8.Sunburn 9.Innocent 10.Falls of Me 11.Shimmer 12.Bittersweet 13.Puppet Strings
14.Hemorrhage
Fuels website here.
FUEL OFFICIAL 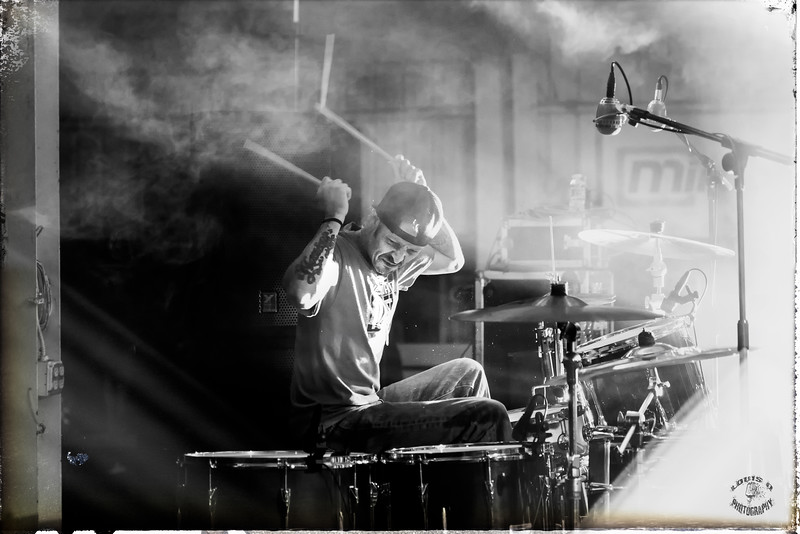