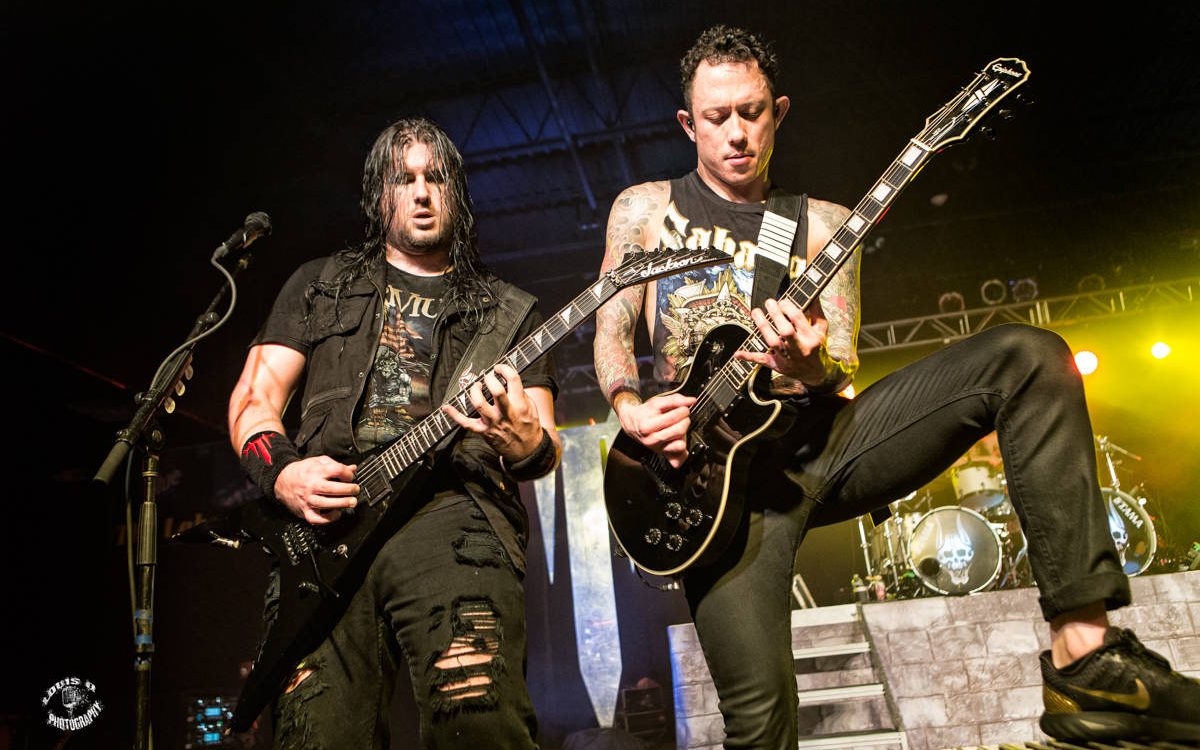 TRIVIUM BRINGS ITS METAL ASSAULT TO BINGHAMTON, NY WITH GUESTS HUNTRESS AND SABATON

On Saturday October 15, 2016 Trivium invaded the Magic City Music Hall in Binghamton, NY on the final leg of their tour in support of their last project, Silence In The Snow along with supporting acts, the Los Angeles based Huntress and the Swedish metal band Sabaton.
After spending the past year on the road, Trivium revved up for the final stretch of this tour in Binghamton in true metal style. The fans were out in force to see the well known Trivium who formed in 1999 and were signed to Roadrunner Records in 2004; and have to date released seven studio albums and nineteen singles. The Orlando based heavy metal bands current lineup consists of Matt Heafy on lead vocals and guitar, Corey Beaulieu on lead guitar, Paolo Gregoletto on bass and Paul Wandtke on drums. It wasn’t immediately clear if many of the metalheads in the crowd that night were too familiar with Huntress or Sabaton, however after strolling through the hall and seeing many, many Sabaton T-shirts in the crowd, it was convincing that these fans were well aware and ready for the metal onslaught that was about to be unleashed upon them!

The Los Angeles based metal band Huntress, led by the mesmerizing and enchanting vocals and stage presence of lead singer Jill Janus, took the stage first and hit the audience hard right off the bat with their first song “Sorrow”, from their most current album Static. The crowd at Magic City Music Hall was immediately enthralled with Janus and her band-mates led by Blake Meahl sporting a classic Gibson Flying “V” guitar on lead guitar. Following their first song, the female fronted metal band charged right into their next song “Flesh” and continued throughout the night pounding out fan favorites from their vault such as “Zenith” and “I Want to Fuck You to Death” (co-written my the late great Lemmy Kilmister of Motörhead. Huntress showcases heavy dual guitar melodies with catchy riffs, thundering drums and bass with hook filled choruses. Huntress ended their melodic yet heavy set with their biggest hit to date, “Eight of Swords”. Huntress surely got the crowd pumped and ready for more metal and set the tone for the next two acts who surely had their work cut out for them if they were going to keep this metal crowd amped up for the remainder of the night. Huntress’ line up currently consists of Janus on vocals, Meahl on guitar, along with Eli Santana on guitar, Eric Harris on bass and Tyler Meahl on drums.
Visit Huntress Online here:
Huntress Official

The Swedish power metal militia band Sabaton hit the stage next bringing with them a full frontal assault (minus the tank or nukes) with front-man Joakim Brodén leading the troops as they powered through their set-list filled with thundering songs with lyrical themes based on war and historical battles. Sabaton, from Falun, Sweden, formed in 1999 with current members Brodén on vocals, original bassist Pär Sundström, guitarists Chris Rörland and Tommy Johansson and Hannes van Dahl on drums, Sabaton is currently on tour in support of their newest release, The Last Stand. Sabaton opened their set with their massive hit “Ghost Division” and followed up with the title track off their new album, “Sparta”. The assault continued throughout the their set with powerful energy, crowd participation, and a mega thunderous back-end and shredding dual guitar riffs and forceful command of the audience by Brodén.

Sabaton played many tracks from their albums Primo Victoria, The Art of War, Heroes, and The Last Stand such as “Night Witches”, “Swedish Pagans”, “To Hell and Back”, “The Lost Battalion”, and more. By the end of Sabaton’s set, the crowd was more than geared and fueled up in anticipation of the headlining act of the night, Trivium.
Visit Sabaton Online here:
Sabaton Official

After the supporting acts, Huntress and Sabaton got the crowd at the Magic City Music Hall totally jacked up on powerful yet melodic, commanding yet haunting and enchanting yet energetic sets, they were definitely ready for Trivium to take the stage. Trivium came out as expected in full metal fashion and kept the momentum going, even bringing it up a notch with their opening song “Strife” from the album Vengeance Falls and continued with heavy hits “A Gunshot to the Head of Trepidation”, “Forsake Not the Dream”. Following was “Rise Above the Tides” from their current album Silence in the Snow.
Heafy and Beaulieu ripped into several shredding dual guitar solos throughout the night and Heafy proved his vocals were still top notch and stellar as he screamed through many Trivium songs with ease. Bassist Paolo Gregoletto and drummer Paul Wandtke provided an amazing steady powerful rhythm section behind the blistering guitar work and vocals. Heafy easily engaged with the crowd in an almost rhythmic and hypnotic manner at times telling the audience to all get down and on cue jump in unison and had the pit going wild in the center of the hall. Heafy discussed the upcoming reissue of their album Embers to Inferno which is due out in early December. Trivium continued to play throughout their nearly hour and a half set 14 songs including their newest release “Until the World Goes Cold and finally closed the night with “In Waves”

Visit Trivium Official Website for news, tour and music here:
TRIVIUM OFFICIAL
Despite the fact Trivium was on the headlining bill of this tour, all three bands put on an equally impressive and powerful set and did not disappoint in the least. Any one of them could have been the headlining act. The crowd at Magic City Music Hall witnessed most likely one of the best metal tours to make a stop in Binghamton in a long time. If any of the people in the audience were not familiar with any of the three acts, I’m sure they were by the end of the show and the bands gained many new fans.
Trivium Setlist:
1. Strife
2. A Gunshot to the Head of Trepidation
3. Forsake Not the Dream
4. Rise Above the Tides
5. Into the Mouth of Hell We March
6. Silence in the Show
7. Entrance of the Conflagration
8. Anthem (We Are the Fire)
9. Pillars of Serpents
10. Until the World Goes Cold
11. Down From the Sky
12. Built to Fail
13. Pull Harder on the Strings of Your Martyr
14. In Waves