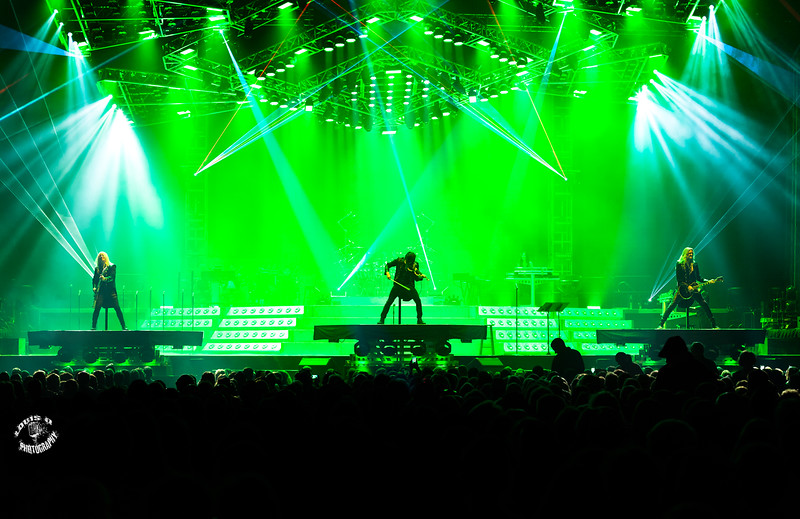 The Trans-Siberian Orchestra mesmerized fans, young and old alike, in Wilkes-Barre, PA this past Black Friday during the first of two sold out shows at The Mohegan Sun Arena at Casey Plaza. The Trans-Siberian Orchestra put on an enchanting and powerful Christmas performance as I caught them at their first of the two “The Ghosts of Christmas Eve” shows at 3 p.m. in the Mohegan Sun Arena. The famous rock opera is currently celebrating its 20th anniversary and continues to grow each year with its performance, stage show, and more importantly, its fans who continue to return year after year bringing new generations of followers along for the yearly magical experience. The audience cheered in anticipation as the intro began with storyteller Bryan Hicks orating his tale describing “The Ghosts of Christmas Eve.” A 10 piece chorus accompanied his narration as images flashed across the five massive LCD screens of showing clips from the 1999 television movie of the same name along with famous historical figures, the solar system and enchanting yet uplifting messages. The multi-colored light and laser show kicked off the intro in true rock opera Christmas fashion. The audience were treated to Christmas favorites such as “O Come All Ye Faithful/O Holy Night,” “This Christmas Day,” and “Christmas Canon Rock” as the spectacular production continued in sync with the music as the enormous five panel screens displayed the choreographed images. The laser spectacular, “digital” snowflakes, three platform risers along with a rising catwalk, and let’s not forget the explosive and stunning pyrotechnics that erupted from the entire arena from front to back all added to the visual excitement of the show. Legendary conceptual composer, producer, lyricist and songwriter Paul O’Neill continues to make his grand vision of the TSO production a masterpiece for all that experience it from the intro to its dramatic conclusion. This ever evolving group continues to weave, like tapestry, its lyrics, songwriting, music, storytelling and production into a timeless magical and enchanting journey filled with wonder and amazement. 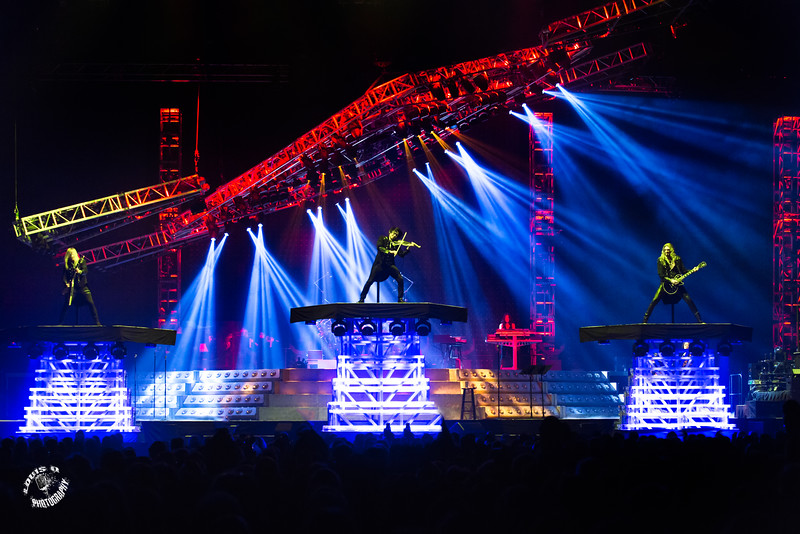 With super guitarists Chris Caffery and Joel Hoekstra flanking each side of the stage along with violinist Roddy Chong, bassist David Z, Mee Eun Kim and Derek Wieland on keys and drummer Jeff Plate on his throne behind the massive drum kit, the audience not only experienced the amazing visuals of a TSO show, but an astonishing and stunning musical experience as well. At the beginning of the performance, Caffery, Chong and Hoekstra stood on separate risers that lifted them a good twenty feet above the crowd as they traded chops and riffed along in sync to the classic TSO hits keeping the rock show experience alive with their stage presence, dynamics and moves. The Trans-Siberian Orchestra showcases different vocalists throughout the program lending to their unique rock/opera sound which included a special performance by Kayla Reeves and Paul O’Neill himself following the first set of traditional Christmas favorites. TSO opened with the intro, “Who Am I” then went right into “March of the Kings,” “The Lost Christmas Eve,” which featured Hoekstra on masterful acoustic guitar followed by “O Come All Ye Faithful/ O Holy Night. Also on the set for the show were “Good King Joy,” “Christmas Dreams,” the mega popular hit which included the performers high above the audience on a catwalk playing “Christmas Eve (Sarejevo 12/24)” as fire and laser beams erupted from both the front and the back of the arena. 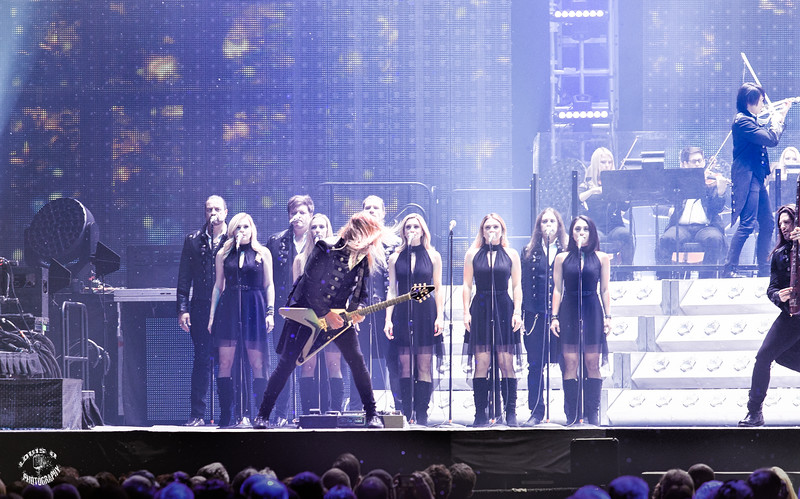 TSO kicked it up a notch during their second, more rock and roll infused set, as they performed songs from their albums Night Castle, Beethoven’s Last Night, and Letters From The Labyrinth going all the way back to the Savatage sounding days of yore. They did however slow things down a bit when they played “Music Box Blues,” “Find Our Way Home,” and the cool number featuring O’Neill and Reeves, on “Not The Same”. The super group/orchestra capped off the show as they crushed a rocking Beethoven’s “Requiem (The Fifth),” and a reprise of “Christmas Eve (Sarajevo 12/24).” Fireworks and more pyrotechnics ended the show leaving a powerful impression as both Caffery and Chong made their way through the aisles of fans. Included, was the recent addition of the pyramid at the rear of the crowd which opened up and shot flames high into the arena at the end of the set. 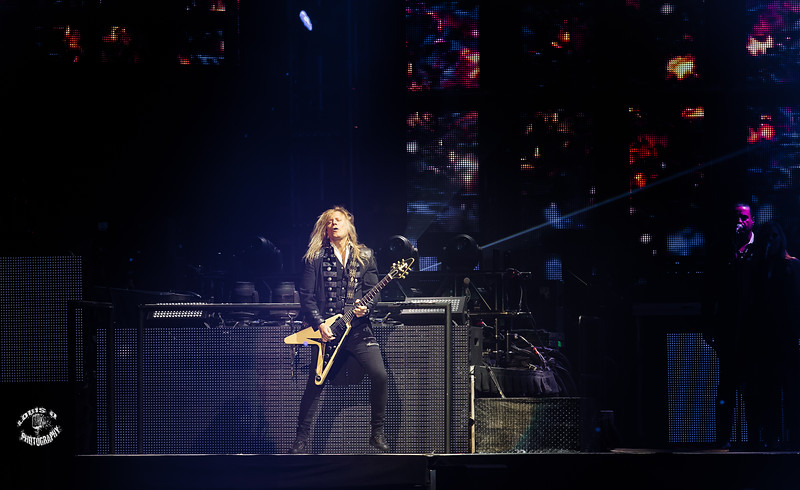 The Trans-Siberian Orchestra experience now in its 20th year has grown in leaps and bounds since 1996. Having started out as a small production with a few cargo vans and some rock stars from previous bands such as Savatage with Jon Olivia, Al Pitrelli and Paul O’Neill at the helm, now boasts over 10 million concert ticket sales and over 10 million album sales.They are well known for their extensive charity work. At the beginning of the first performance, it was announced that over $13,000 from ticket sales would go directly to Candy’s Place – The Center for Cancer Wellness in Forty Fort. TSO has both an East and West coast group with dozens of performers and have grown from hauling the show in a few vans to literally over a dozen semi tractor trailer rigs and multiple tour buses. This was my first Trans-Siberian Orchestra experience and was literally blown away with the size of the production, the amazing talent of the performers and musicians, the theatrics and show. It was like no other I had seen. A TSO show is a very family friendly experience with a very gracious and generous attitude that always gives 110% in every aspect of their show as if it were their first. As I recently heard from Al Pitrelli on social media he states “I’ve been playing with some of these people for thirty years now, the chemistry is amazing when this band gets together we get to the first rehearsal well, its like playing the first show, but we’ll do it 30 or 40 times so when we do blow up the building for the first time, it seems like the hundredth show. Everybody in that audience, it’s their first show, whether its our 10th, 100th, 2000th, it doesn’t matter, everybody in that audience deserves the perfect first show.” Trans-Siberian Orchestra continue both their east and west coast tours through out the remainder of the year at times playing two shows a day.

Just a bit of the amazing stage and production transportation fleet not including the tour buses, vans, security vehicles and more. 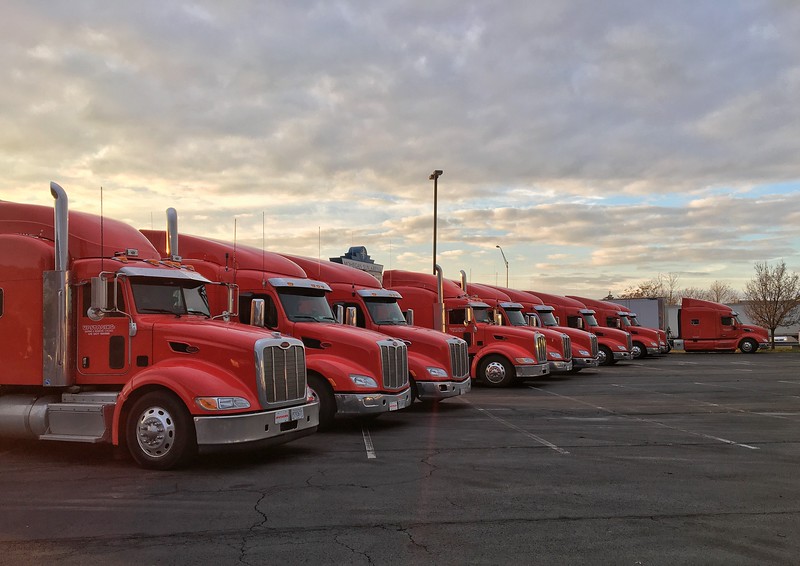